Word of the Day

Dendrophilia: the love of trees. The term may sometimes refer to a paraphilia in which people are sexually attracted to or sexually aroused by trees.

Since starting my travels I have often oscillated from one extreme to another in an effort to derive some kind of balanced existence. This has taken many forms: periods of aggressive partying will be followed by abstinence and a renewed interest in the gym; after travelling with friends I have enjoyed some alone time (and vice versa); from the bustle of city life I’ve yearned for the tranquility of a beachside bungalow or a mountain retreat.

One of these switcharoos was required after the work I had put into my recent attempts at self-improvement. In search of relaxation and serenity my destination of choice was Salento, a breezy 9 hour bus ride through steep winding roads from Medellin.

Salento sits in what is known as the Zona Cafetera, or Coffee Region, of Colombia, as its consistent year-round weather conditions are perfect for growing the stuff. It is a quiet little town surrounded by lush countryside which for me (and anyone old and British enough to remember) is reminiscent of the backdrop for Postman Pat, with hills and trees so green and perfect that they must be fake. 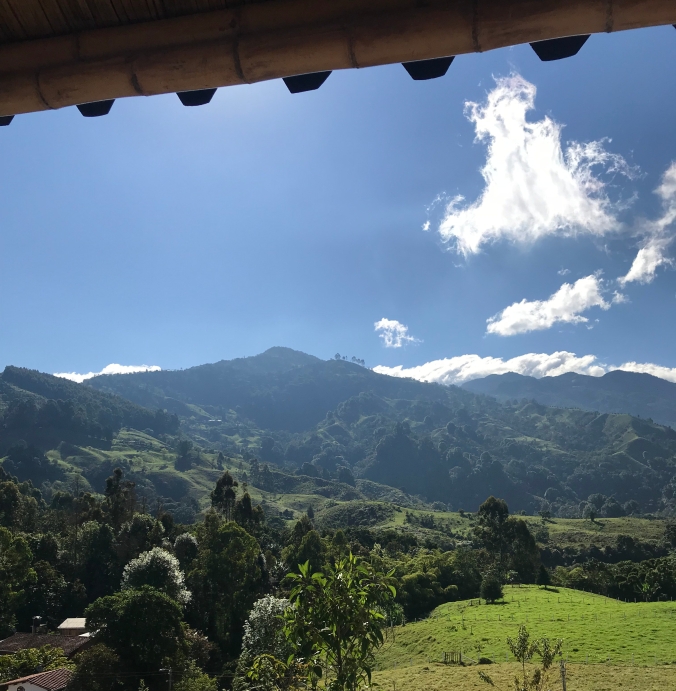 Other than visiting one of its many coffee farms, which is a pleasant way to spend a few hours, you can also play Tejo, a Colombian sport/pastime (depending on who you ask, a bit like darts) which involves throwing heavy metal pucks at a gunpowder-filled target 20 metres away, creating a mini explosion on a successful impact.

My game, including a cameo performance from two visiting Profumos (hi Proffo and Steph) was, as usual, accompanied with a bottle of aguardiente, so we sensibly played the gringo version from half distance. Still, with the neighbours’ pucks whizzing past our ears at great speed we were relieved to emerge unscathed.

The real draw that brings the backpackers to Salento is a tree – Colombia’s national tree – the wax palm, which is most prevalent in the nearby Cocora Valley.

I didn’t realise I was a dendrophile (not in the sexual sense, I might add) until recently but, on reflection, I have been fascinated and surrounded by majestic trees since my early childhood. Living in a house called Redwood, named after the giant conifer in our garden, I also loved the weeping willows of our neighbours, the towering oaks at my first school ‘Oakwood’ and the ancient yews of the nearby Kingly Vale (see below). The mystical power of trees is hard to put into words but Herman Hesse does a pretty amazing job here (thanks for the assist Julia).

The wax palms of Cocora Valley are very different from all of the above but truly spectacular as these trees, sometimes growing as high as 60m, all trunk and no leaf, seem to have somehow outpaced evolution. With no obvious need to be so tall relative to one another or their neighbours they are really just showing off. 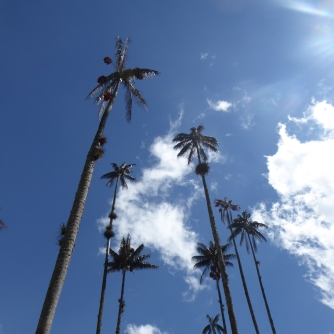 Often compared to the Truffula Trees in Dr Seuss’s The Lorax, their dimensions and general appearance are certainly surreal. With the perfect sunny day and a mountainous backdrop we couldn’t help but keep taking photos. 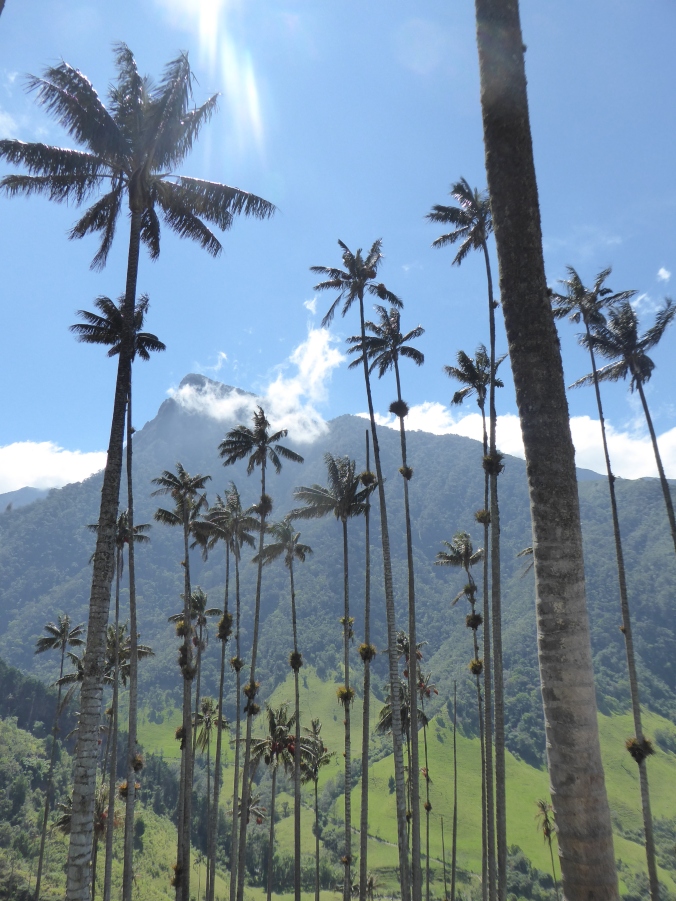 Returning to El Viajero in Salento after 6 hours of walking, a free yoga session put on twice a week by this excellent and great value hostel (shout out to my El Viajero amigos) was the perfect way to stretch out and wind down. Yoga, a traveller staple, has not played a huge part in my trip but I have enjoyed it when available, always feeling energised and motivated by the practice.

The yoga sessions in Salento were hosted by Vladimir, an excellent instructor with an immediately warm and loving energy. He was spiritual in a genuine and unforced way, and sang beautifully at the end of each class. 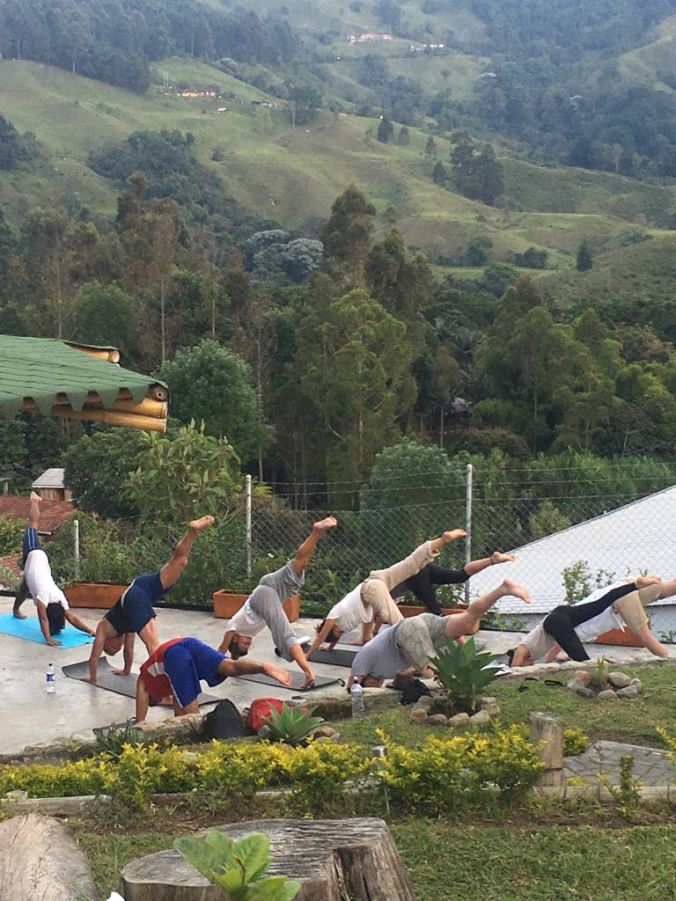 I felt somehow drawn to Vladimir and was not surprised to find out that he was a practicing shaman. After my recent ayahuasca experiences I hadn’t been planning on taking any more plant medicine, but they say the plants call you when you’re ready, and I had a strange feeling that I was supposed to meet Vladimir at this time. It turned out he was hosting a san pedro retreat on the only 2 days I had free before meeting friends, cementing my belief that the universe wanted me there.

San pedro is an Amazonian cactus, one of the three main ‘power plants’ along with ayahuasca and peyote. Albeit less potent than ayahuasca, san pedro is also a psychedelic, well known for its healing properties and its ability to rekindle people’s love and enthusiasm for life.

Not having any ailments to be healed, nor feeling short of enthusiasm or love for life, I perhaps didn’t need a san pedro retreat like some of the other participants, but I thought it would be an interesting experience, and it was. 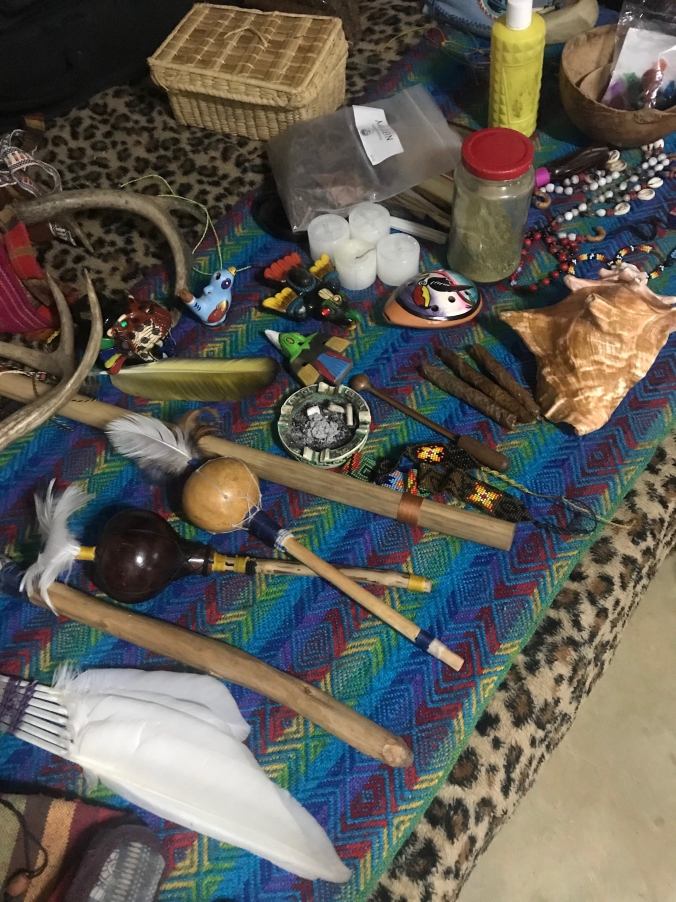 The ceremony, conducted entirely in Spanish for 12 people, started at 10pm and finished at 11am the next morning, without interruption. We drank, chewed and ate the san pedro, also known as ‘huachuma,’ throughout the night while sat around a bonfire getting increasingly ‘chumado’ while singing and chanting with the assistance of tribal drums, guitars, panpipes, rattles and various other instruments. It felt a lot less weird than it sounds. No photos were allowed during the ceremony but this was the aftermath. 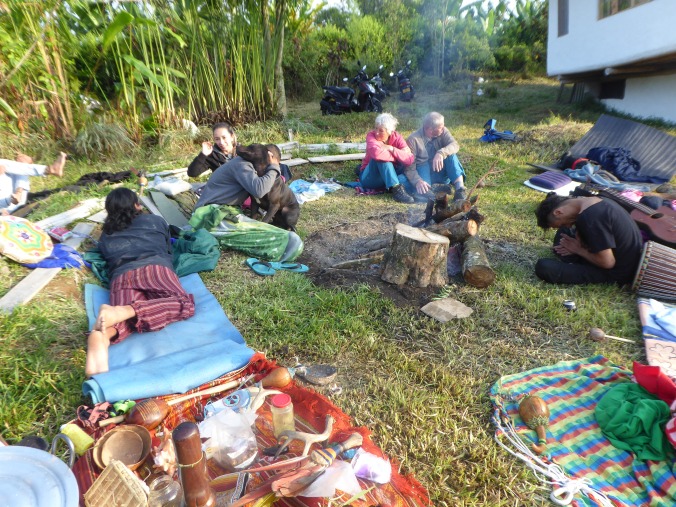 We took turns to pass around the Talking Stick (that’s my inaccurate translation from whatever the Spanish was) whereby each person got to hold a stick and speak to the group about anything on their mind. My statements in Spanish were short and jovial, as the huachuma only made me feel a little silly and spaced out, but for many of the people involved this was an extremely emotional coming of age. Most of them cried some combination of happy and sad tears, and left the following day as new people, rather like I had felt after my ayahuasca experience. 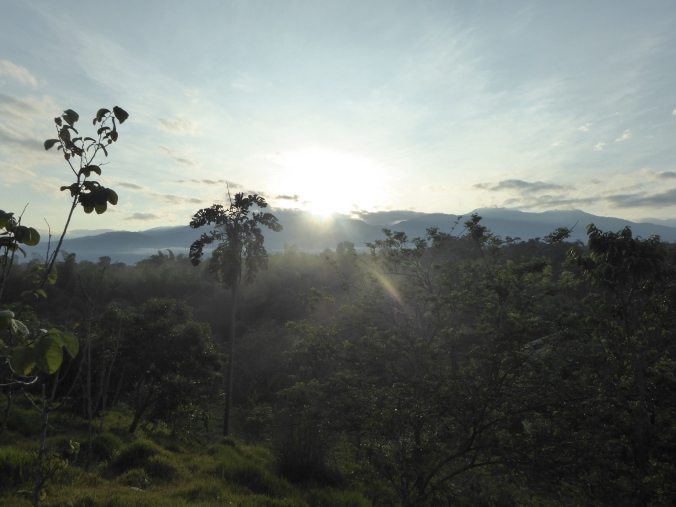 Perhaps the language barrier softened the impact of the shaman’s words, but for me it was an unusual and entertaining night rather than a life-changer. Having said that, watching the sun rise from complete darkness behind the mountains was a beautiful sight that I will never forget, as was this goat doing yoga on the verandah. 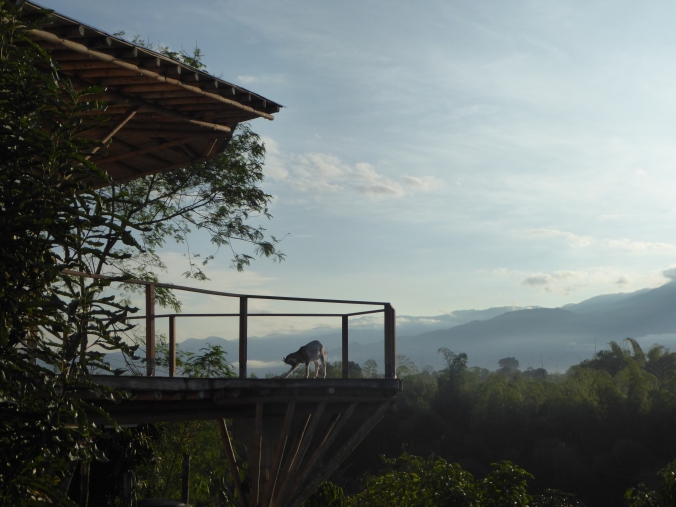 Words of the day:

Phonophobia: a fear or aversion to loud sounds

After 10 years in London I had accepted the noise of the city: like people living next to a busy railway track who stop hearing the trains you get used to it.

I moved to New York in late 2015 and the volume went from 7 to 10. The buzz and energy of New York are a big part of what makes it special but there is no escape hatch when you’ve had enough. You can get anything you want in downtown Manhattan, unless you want outdoor quiet time which is guaranteed only by leaving the city.

I was sad to leave New York after 14 months but happy to leave behind the noise. Living on 19th street, one block away from a fire station, I had a specific issue with the unnecessarily loud and genuinely frightening FDNY fire trucks. Words like ‘beep’ and ‘toot’ are totally inadequate to describe their booming devil horns which assaulted not just the ears but the whole body and soul. I realise they were saving lives and I was just trying to sleep but I developed a genuine phonophobia from the incessant horn abuse.

A German friend who I spent time with in New York (hi again Luki) was, at the time, working on a really interesting project called the Sonic Movement. With growing numbers of noiseless vehicles, for safety reasons European regulations now mandate that new electric cars sold in the EU must emit noise by 2019.

Rather than the unimaginative replication of existing combustion engine noises proposed by the regulators, the Sonic Movement identified this once-in-a-generation opportunity to make our motorways and city streets sound more pleasant.

What if, instead of screeching brakes and roaring engines, electric cars sounded like classical music? Instead of toots and beeps and FDNY death honks, horns could replicate birdsong. Yes, my two examples are totally impractical but there must be a happy medium.

With all this emotional and aural baggage I approached the Forest of Fontainebleau on day 29, about 40 minutes south of Paris, for a solo walk in the wilderness on a Monday. I took a fold-up paper map and deliberately left my headphones at home – just me, my map, and the sounds of the forest. I didn’t have a loin cloth handy but packed my speedos just in case.

I had planned to switch off my phone for the day but as I entered the woods I realised how dependent I had become on the little computer in my pocket. How will I know how far I’ve walked? How will I take photos? What if I get really lost? I put it in airplane mode and resolved to use it only for emergencies (and photos and poetry recitations).

Marching deeper into the deserted forest I realised it was the first time I had done something like this, totally alone, and took pleasure in just wandering along, observing and listening. I was also in search of a suitable location for my first attempt at ‘forest bathing.’

The Japanese love a good tree and when they’re not celebrating the cherry blossoms during hanami you may find them in the woods enjoying a spot of shinrin-yoku. This essentially involves ‘taking in the forest atmosphere’ and is regarded as a form of preventive healthcare.

I identified a small clearing under some oak trees and lay down for 15 minutes looking up at the canopy. I can honestly say I have never felt so relaxed. A couple of aeroplanes passing at 30,000 feet provided an amusing contrast as I lay silently among the leaves. As insects buzzed past and acorns dropped around me I had once again found my perfect paradise.

This time lapse video captured my view (extra point if you can spot the plane):

The woods weren’t completely deserted, but in 6 hours of walking and shinrin-yoku I had seen only two men, one lady of the forest and three dogs. After enjoying my own company for hours on end my interactions with these strangers were a little awkward, especially when I realised one of them was working.

As I calmly walked through the trees, enjoying the silence, I remembered the first line of the prose poem Desiderata by Max Ehrmann which was on the wall at home when I was growing up:

Go placidly amid the noise and haste and remember what peace there may be in silence.

I was never encouraged to read the poem – it just hung there – but over time it has come to mean a lot to me. It is a beautiful collection of words offering gentle guidance on how to live life. As I had no music to distract me and a lot of walking to do I decided to learn it.

Finding a lovely spot for afternoon tea on one of Fontainebleau’s many formations of huge boulders I set up my recording studio and gave it a go. The gap after the word ‘silence’ was deliberate, but all other dramatic pauses were just me trying to remember the words.

From the noises of London and New York to the silence of Fontainebleau I am making an effort to go more placidly; my day alone in the forest was very special and I believe that all my big city friends would benefit from a little more silence, shinrin-yoku and maybe even some boulder-top poetry recital.

There was an error retrieving images from Instagram. An attempt will be remade in a few minutes.