I’ve always wondered why people take so much pleasure in hitting certain numerical milestones – what is it about the number 100, or any round number, that gets us excited? My 100th day passed by completely unnoticed, but now does seem as good a time as any to take stock of progress. So, how am I doing?

Well for starters, my travels in Central America have been very smooth. No yellow fever, no food poisoning, no aggro from locals or travellers, no muggings at gunpoint, no dodgy moments at all really (apart from that $5 bus ticket I paid for 3 times, which was funny). I don’t believe in tempting fate, but feel free to touch wood on my behalf (how is your mum?). I’ve spent a bit more cash than intended, but that was always going to happen.

True fans of the Gump Method (hi Mum, hi Dad, hi Rebecca) will remember the promise I made to myself back on Day 12; I wanted to ‘get good at’ Spanish, Surfing and Salsa – the three S’s. I concede that these are not the most noble of objectives – I’m not building any wells or teaching English to orphans – but for now I’m doing exactly what I want to do, and it’s great.

Unfortunately, after my last post, 97 days into not working and travelling in mostly Spanish speaking, surfable countries I was, in all honesty, having a 4th S – a Shocker. Marks out of ten would have been: Spanish 2/10, surfing 3/10, salsa 0/10. Must try harder.

Keen to make meaningful progress in at least one area I made my way to Santa Teresa, a surf Mecca on Costa Rica’s Pacific coast with consistent, year round waves and a distinctly higher than average ratio of beautiful people riding around on quad bikes. 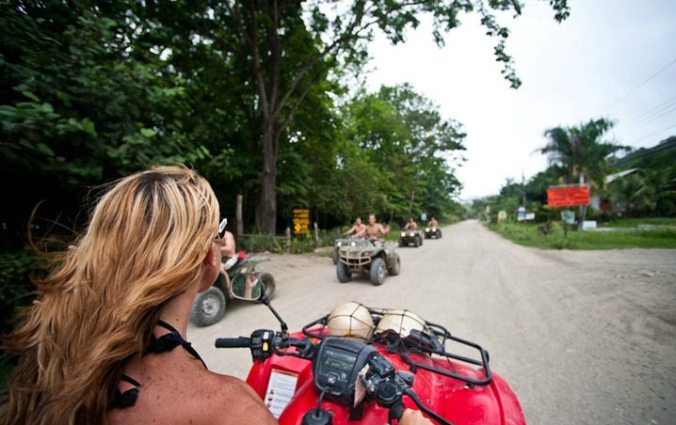 Athletic physiques, sun-kissed bodies, long hair (especially on the men) and a LOT of tattoos were the first things I noticed on arrival. Occupying, at best, one of those four categories I knew I would have my work cut out to fit in, but I arrived with a steely determination and some factor 50 with one objective in mind: surfing.

After an epic journey south from Nicaragua involving 8 public buses and a ferry in one 24 hour period, I arrived in a hot and dusty Santa Teresa in the week of Christmas. As a festive treat I decided to splash out, spending $30 per night on a private room at Tranquilo Backpackers; rock and roll.

Sadly when I rocked up I was met by an extremely tranquilo unoccupied building: I had booked 6 nights in a hostel that had closed 3 months earlier. Shiiiiiit. Thankfully Booking.com resolved the situation quickly, so all was well as I settled in at a new hostel with a friendly local iguana, before enjoying my first beachfront yoga session, assisted by a local pooch who had a few moves of his own (and a wandering right paw). 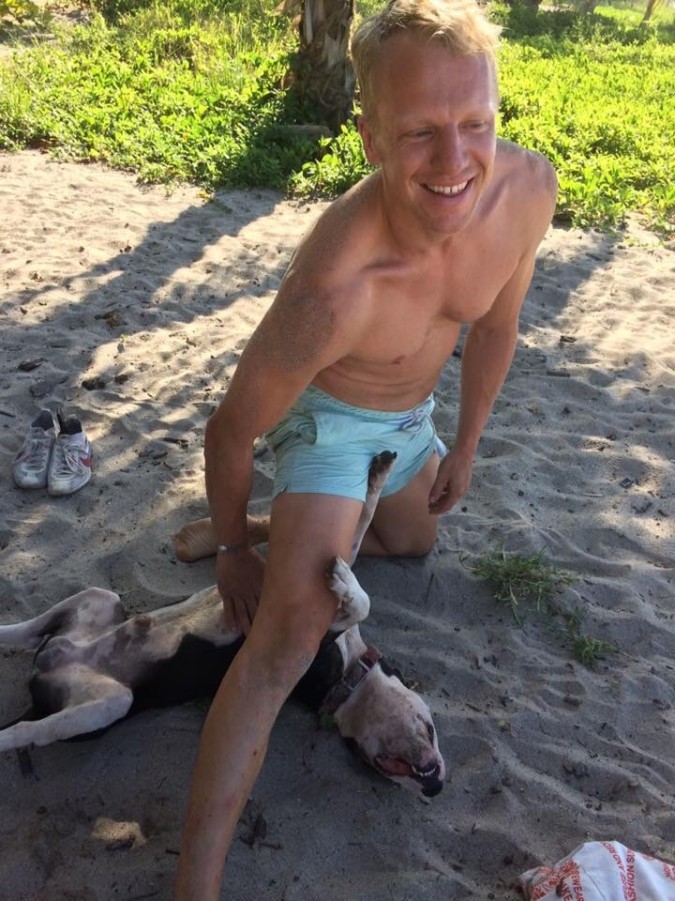 Everywhere in Costa Rica locals use the term ‘Pura Vida.’ The direct translation is ‘pure life’ but they seem to apply it to anything from ‘hello’ to ‘goodbye’ to ‘cheers’ to ‘isn’t this great!’ At first I found it annoying, but after a week in Santa Teresa I finally got the idea.

At first glance Santa Teresa is little more than a friendly and chilled out surf town, but to fully understand its Pura Vida lifestyle you need to experience another 3 S’s – sunrise, sunset and surfing.

As the clock approaches 6am the beach is quiet but surfers are guaranteed to be making the most of the glassy, warm waters as the sun rises and the yogis complete their early morning practice. It is a beautiful, cleansing and peaceful time to be alive (disclaimer: photo below is not actually sunrise but pretty much captures it).

The true essence of Santa Teresa can only be experienced at sunset. Every evening, without fail, what feels like the whole town makes its way to the beach as the sun goes down. Families and friends, locals and travellers all socialise around huge bonfires as incredible sunsets illuminate the silhouettes of surfers catching the final waves of the day. Its simplicity and purity can only be understood first hand. 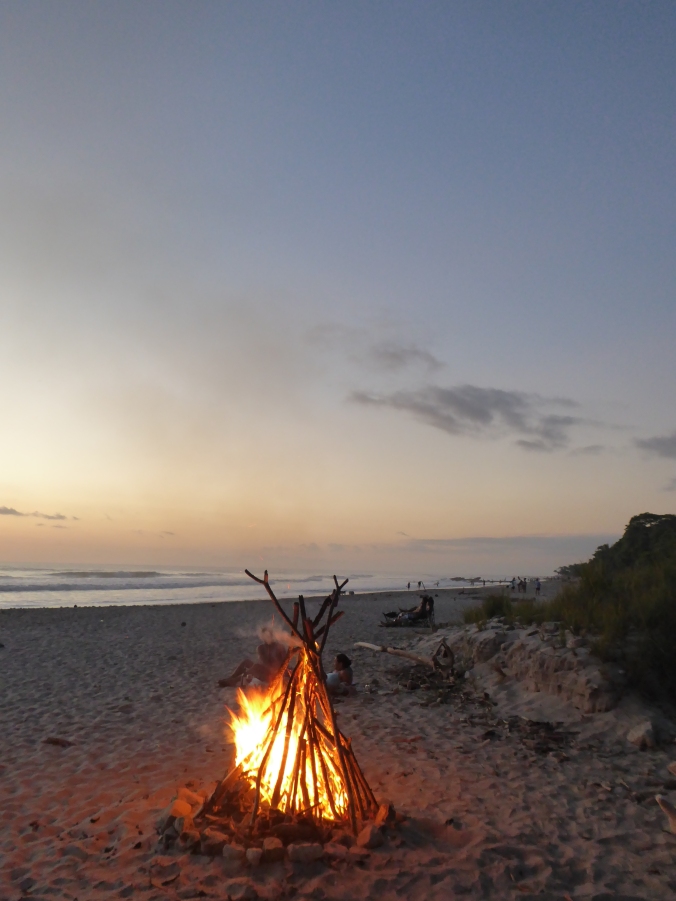 While I must give a shout out to the amazing (sexycute) crew at La Posada Hostel, with whom I shared much of my leisure and surf time, the story I want to tell here starts and ends with an Italian surfing legend called David.

David followed his passion for surfing to Santa Teresa 18 years ago when it was barely more than a dirt track with 3 or 4 cars passing through daily. He bought up some land (which has since gone up in value by around 20x), fell in love with a lovely Canadian woman (hi Jessica) and proposed to her in their first week together (lad).

They now have 2 great kids, loads of friends, a surf shop, some lovely rental accommodation (Check out Rio Carmen Rooms), surfing on the doorstep and more Pura Vida than you could imagine.

I approached David’s surf shop, “The Shit Hole” (the name came to him in a dream) looking for a rental board and a lesson. What I did not expect from this visit was great friends, significant improvements in both my Spanish and my surfing, membership of Darts Club every day after sunset, and even an invite to Christmas dinner.

But first, the surfing. If I was going to break the Rules (surf instructors must have neck length hair, deep suntans and washboard abs), I might as well break them in style. I’m guessing David’s abs were last seen sometime in the 20th century (sorry David if that’s inaccurate), and as he donned a hat with a chin strap to keep his face out of the sun, he did not look like your typical surf dude with attitude.

Appearances can of course be deceiving, as David was undoubtedly the coolest (and most effective) surf instructor I’d ever had. When he wasn’t tiptoeing up and down his longboard he was giving me great tips and advice, helping me to catch some decent sized waves properly for the first time. 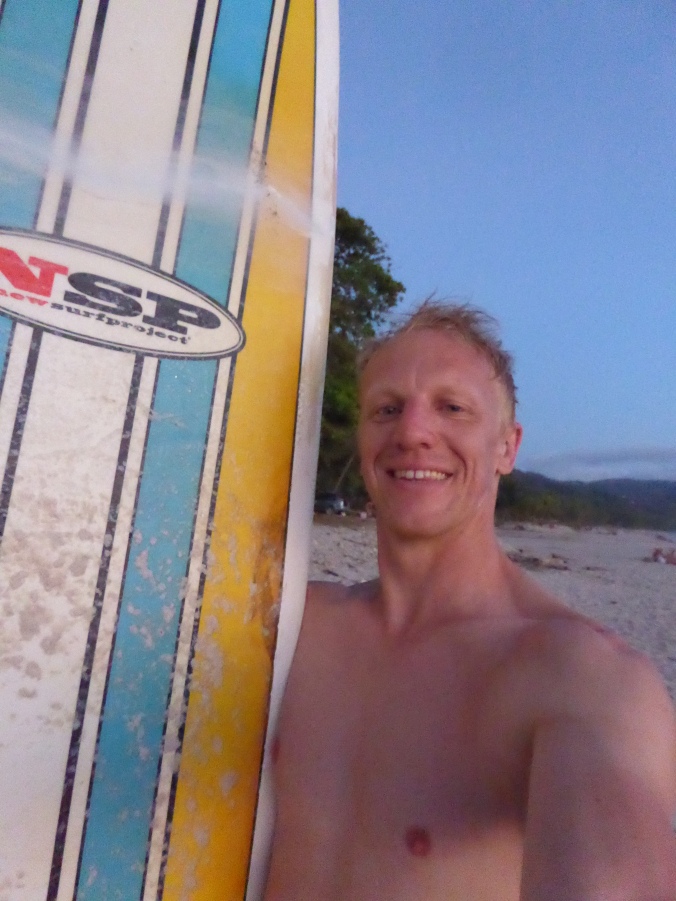 I had been waiting for something to click and, in Santa Teresa, surfing day-in-day-out for hours on end it finally happened. Rather than sitting there thinking about all the technical points I had to remember – wave direction, board position, when to paddle, when to pop up – at some point I stopped thinking and just did it, which is when it started to work.

To be clear, I am still a crap surfer on an 8 foot 6 inch board, but after a few days in Santa Teresa I was finally getting there, catching big, green waves and riding them laterally (rather than in a straight line towards the beach). It was an incredible feeling.

(Another disclaimer: the photo below is not of me; I was somewhere nearby, probably underwater).

Surfing on Christmas Day in Santa Teresa was yet another lifetime highlight which I will never forget. After a couple of days spent out of the water due to a big swell, the waves were still pretty huge and I probably shouldn’t have been out there, but I was determined to make the most of my remaining time before an early morning Boxing Day departure.

While I enjoyed every minute of it, I had a really tough day. After catching a couple of early waves I spent most of the morning and afternoon in the ‘washing machine.’ As the sun descended on my final evening session I gave my camera to a friend in the vain hope (both senses of the word vain) of capturing some shots of me actually surfing before I left (spoiler alert: she didn’t get any).

I don’t know if it was the pressure of it being my last day, or an awareness that the camera was rolling, but I got the crap kicked out of me more in that half hour period than in the whole previous week.

While my time in the water might have looked unpleasant to an observer, there is a weird sense of enjoyment in getting thrown around like a lottery ball by the natural forces of sea and moon. Still, after about 15 or 20 minutes of constant battering the adrenaline wears off and you just want a hug. 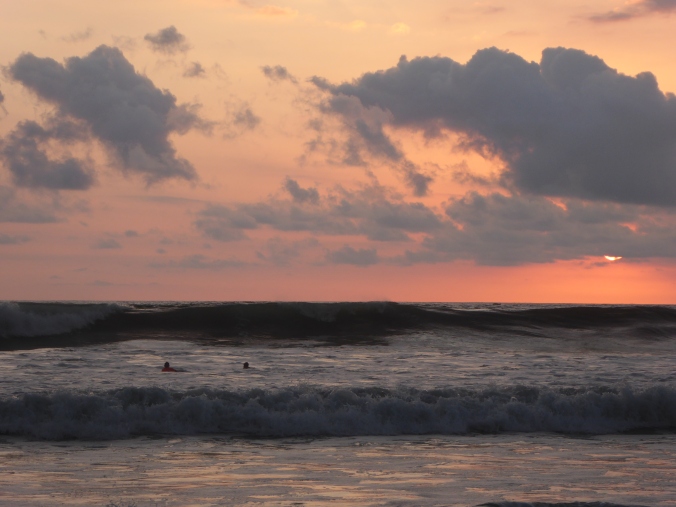 Desperate to catch one last Christmas wave I finally found a long enough break in the sets to make my way to the calmer water outside, straddled my board, looked to the horizon and prayed to the Surf Gods:

“Dear Surf Gods, I know I haven’t always been your greatest disciple, but you have really taught me a lesson in the last half hour and I would be so, so grateful if you could let me ride one last wave in to the beach. I don’t care about photos or videos, I don’t want anyone to see – this is just between you and me.”

Less than two minutes later a big set came in. I saw that the second wave was a ‘left’ (easier for me) and paddled like crazy as I felt the board lifting up behind me. I took off and immediately turned the board left, saw a load of whitewater (I had misread the wave, which was actually breaking to the right), did a big heel-side turn, rode it along the shoulder and, as per my request, surfed it casually all the way back to the beach. It was the perfect Christmas present – thanks Santa (Teresa).

As I eked out the last bit of energy from the wave I saw David and the gang waving from the beach. Proud of what was definitely my best ever wave I did a little salute, before realising that they weren’t celebrating my success but were frantically trying to signal the rocks immediately ahead of me.

I jumped off just in time, averting a couple of hundred dollars of board damage, at which point I simultaneously thanked the Surf Gods and apologised to them for showing off. Pride comes before a fall, but I still couldn’t wipe the smile from my face.

I followed up my best ever wave with our daily game of ‘darts cricket’ back at the Shit Hole while listening to Bob Marley, Jimi Hendrix and other old favourites. With the only shared language of this international Darts Club (hi Luca and Ezekiel) being Spanish I also finally made some progress in that area (thanks also to Mayla and Juana, mí profesoras de la ‘playsha’). 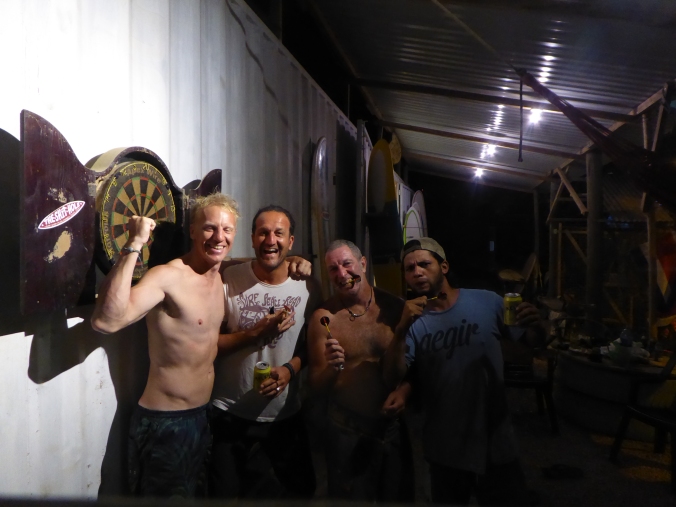 The 25th ended with a huge, international Christmas dinner at David and Jessica’s house with around 30 guests, all of whom brought a dish from their own country (I made shepherds pie). The fact that they annually invite so many people into their family home on Christmas Day speaks volumes about these people and, for me, is Pura Vida on toast. Friends, family, beach, sunshine, surfing, food, drink and fun.

It was a brilliant finale to a wonderful day and week. Big thanks to David, Jessica, their family and friends, Darts Club, the La Posada Hostel crew and all the other wonderful people I met in Santa Teresa. I will be back.