After eating volcano for breakfast, lunch and dinner for the first few weeks in Central America I was relieved as we headed to lower altitudes. First on the agenda was a trip to Somoto, in the far north of Nicaragua, just a few kilometres from the border with Honduras.

I haven’t yet mentioned the poverty in Nicaragua, but the further we travelled from the main cities, the more evident it became. In the north the ratio of horse-drawn carts to cars was noticeably higher, and the quality of housing deteriorated significantly. We were shocked to see our second dead horse of the trip, in a crumpled heap at the side of the road, seemingly left for the vultures to clear up.

Our family-run accommodation in Somoto was rustic – they had a large selection of poultry on site which was killed and plucked on demand depending on our dinner orders. It was the closest I’ve been to my food and, being rather squeamish for a grown man, I found it a bit of a mental struggle as I tucked into a grilled chicken I had made eye contact with a few hours earlier.

On a lighter note, the chickens spared for egg-laying duties roamed free with the geese and turkeys, climbing up a tree whenever they felt like a nap.

The main attraction of Somoto is a deep canyon, ‘discovered’ in 2004 by European scientists but known to the indigenous people for millennia as La Estrechura (“the narrow”), and originally formed somewhere between 5 and 13 million years ago.

As a way of sharing the economic benefit of their natural phenomenon, the local communities in Somoto formed a cooperative, distributing the guiding duties evenly between people from the various local villages. In an area with so much poverty this can only be a good thing.

We climbed, swam and jumped our way down the river which runs through the canyon. Despite it being dry season with lower than average water levels the adrenaline flowed as we jumped into the water from a 12m ledge. I didn’t get any photos of that but here are some towers made from rocks. You’re welcome.

The Bad – My Surfing Abilty

After Somoto we made our way to the Pacific coast of Nicaragua to San Juan del Sur (SJDS), a surfing town well known for its party scene and especially Sunday Funday – an all day ‘pool crawl’ where participants travel between three different pool parties getting increasingly twatted. In a country that is generally cheap for travellers I was impressed by the entrepreneurial instincts of whoever came up with this concept, which essentially involves charging people $40 for a t-shirt. After going too hard on the Saturday night we never made it to Sunday Funday, but this is apparently what it looks like.

By the time we caught up with the revellers later that night on the beach, the well-behaved Fundayers in the photo above had transformed into swathes of staggering zombies, high on a cocktail of rum, vodka and various other substances unknown, except for the Aussie couple who happily informed us they were on acid as they whirled in and out like a pair of Tasmanian devils.

After making limited progress in the South of France and Spain I was excited to try some surfing in the warm Pacific waters of Central America. With a range of surf spots and consistent-but-not-too-scary waves, SJDS is a good place for beginner surfers, so I grabbed the longest non-foamy board I could find and got amongst it.

While I was able to catch a decent number of ‘green waves,’ the best of my (inauspicious) surfing career thus far, I was still a way off from really getting the hang of it, riding them in a straight line towards the beach, unable to really turn the board at speed. We didn’t get any photos of me surfing, but my efforts were broadly as successful as Andy’s attempts at a yoga headstand.

It was clearly time for a lesson. I followed our Rule Number One of Surf Club, which was to find a deeply tanned instructor with hair to chin level or below. Tony was my 22 year old mentor; he gave me some useful tips on technique and, crucially, how to read waves, but seemingly to no avail as my abilities deteriorated – the conditions were sub-par, but so was my surfing.

As the waves got bigger and the wind blew harder I ate an increasing number of ‘salt sandwiches,’ spending a few precious seconds on the board before Mother Nature sent me cartwheeling underwater. Like a trainee pilot amassing flying hours I hoped that my perseverance would eventually pay dividends, but after another 4 days in the water it just wasn’t happening. On the plus side, we did some excellent synchronised jumping.

A few miles down the road from SJDS is Playa Hermosa, an epic, windswept and largely deserted beach that stretches as far as the eye can see towards Costa Rica. On the first night I spent in the Playa Hermosa Ecolodge I was one of only two hotel guests, sharing an incredible view of a clearly illuminated Milky Way with only the geckos, turtles, and a German bloke called David.

The Ecolodge is active in its protection of the turtles that lay their eggs on the local beaches, taking some eggs for safe keeping and hatching before releasing the baby turtles back into the sea. 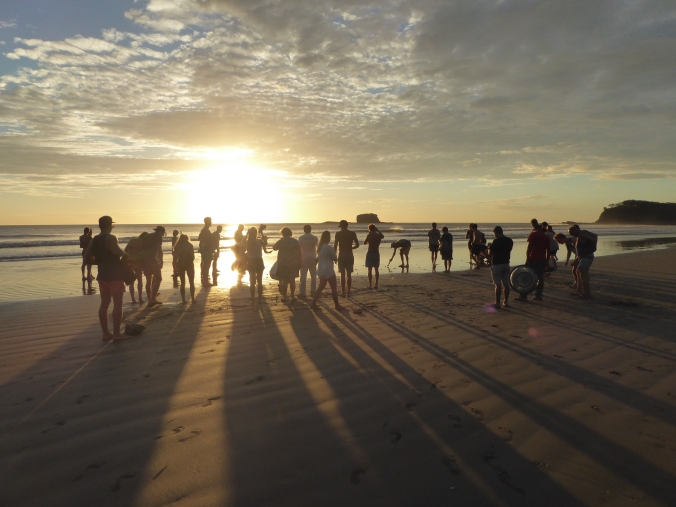 We watched one of these releases, as the lucky little turtles were treated to a beautiful sunset on their first ever swim in the Pacific Ocean. 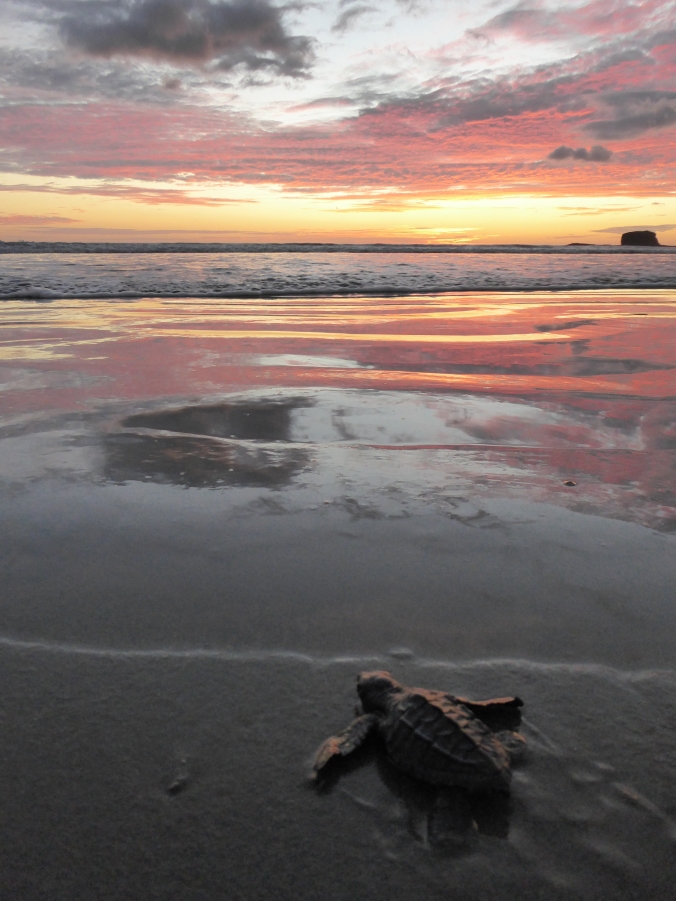 In Popoyo, another surf spot to the north of SJDS, I witnessed what would have been one of the most beautiful natural sights I had ever seen, had it not been ruined by a local egg thief. Reclining in a beachfront hammock I noticed a stir and followed a few people down towards the shore, where a large female turtle was struggling up the beach with a full belly. As the fascinating scene unfolded we kept our distance as she dragged herself slowly along the sandbank.

A local guy was with us, watching intently as she reached her chosen destination and started digging a deep hole. I naively assumed he was there to ensure that none of us disturbed the turtle with our photography efforts, but it soon became apparent that he had a more sinister motive: his breakfast.

Accepting the sad reality of what was about to happen I made my way back to the hostel; I didn’t want to witness the rest of the proceedings. A German couple were less acquiescent, challenging the man as he picked up the turtle and moved it down the beach.

Their valiant effort was most likely in vain as they reburied 8 of the 60 or so eggs that she laid in a different hole. The man disappeared with the remainder in his t-shirt-basket, leaving a distressed turtle flapping away, trying to refill a non-existent hole.

Perhaps I imagined the sad expression on her face, but the turtle looked genuinely dejected as she eventually made her way back down into the sea, concluding a sad chapter for both turtles and humans.

Maybe this man had a starving family to feed; maybe he was unaware of the turtle’s protected status. We consoled ourselves with the fact that there are many successful conservation efforts going on throughout Nicaragua, and hoped that this was an exception rather than the norm.