In our debrief after the tortuous experience of ascending Las Maderas we realised that the primary source of our disappointment was the lack of any discernible reward at the summit. Had there been something to do or see up there it could have been very different, but climbing a volcano just for the sake of it wasn’t really my idea of fun.

While I had no interest in re-climbing Las Maderas, or climbing any other volcanoes for that matter, that is exactly what we did in the following days, but with much better outcomes. Our subsequent ascents were all undertaken with a specific purpose in mind and, as a result, were much more enjoyable.

First up was a walk to a waterfall about an hour and a quarter of the way up. With our legs still burning from the previous day’s exertions it was a struggle, but the huge blue butterflies flapping alongside us were a source of encouragement as we cut through a majestic gorge. 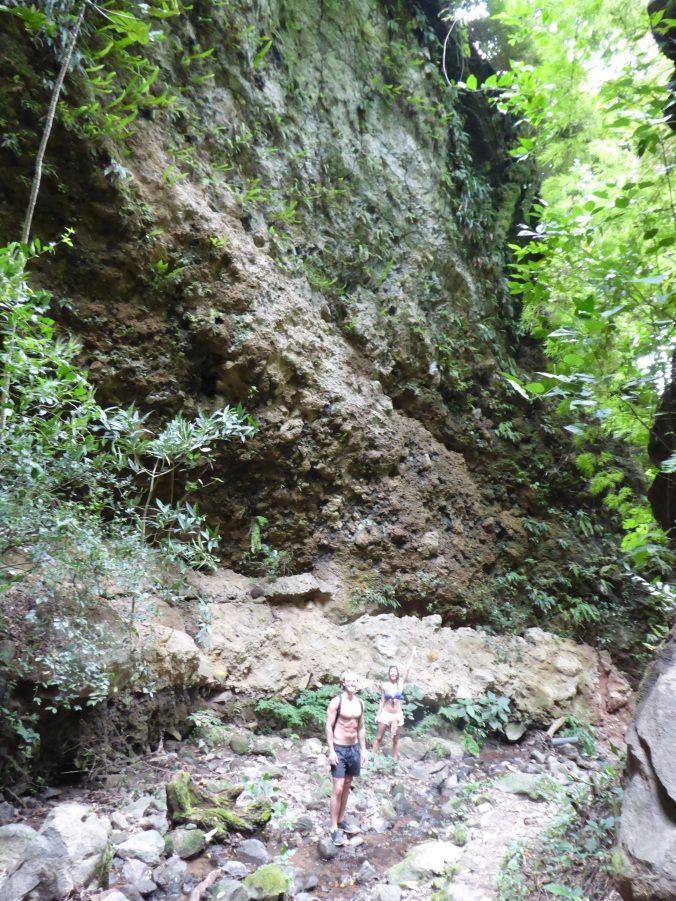 The waterfall was just reward for the effort of climbing up, and we were grateful to be bathing in the cold, refreshing cascade, rather than the muddy swamp of the previous day.

Part III – Partying on a Volcano

Our volcano-based activities took a festive turn the next time we decided to trek up. We went to a ‘pizza party’ at the very cool and organic eco-hostel Zopilote where we were told about another party happening at a secret location on the volcano the following night, in celebration of the coming supermoon.

We packed our bags for the 5.30pm group hike up the volcano but got to the meeting point late and missed the departure by a few minutes. With the next group not ascending until three hours later we returned to our hostel to engage in our favourite pastime – word games. A few rounds of Boggle and Bananagrams were washed down with half a bottle of rum, at which point Andy and I decided we would much rather stay put than climb up that ******* volcano in the dark.

Jolie, to her credit, argued that we could play Boggle anywhere in the world, but we were not anywhere in the world – we were in Nicaragua, about to miss a supermoon party on a volcano. Still not convinced, we compromised by deciding our fate on the toss of a coin. Chance spoke in Jolie’s favour and we made our way up with the 8.30pm group, pumping out tunes on our portable speaker and, for once, enjoying the walk.

As we approached the party we could hear the beats growing louder, and when we finally arrived at the large wooden structure, lit up by the enormous supermoon, we knew immediately that we had made the right decision.

With another 100 or so people that had made the trek up we partied all night around the blazing bonfire and had an amazing time. 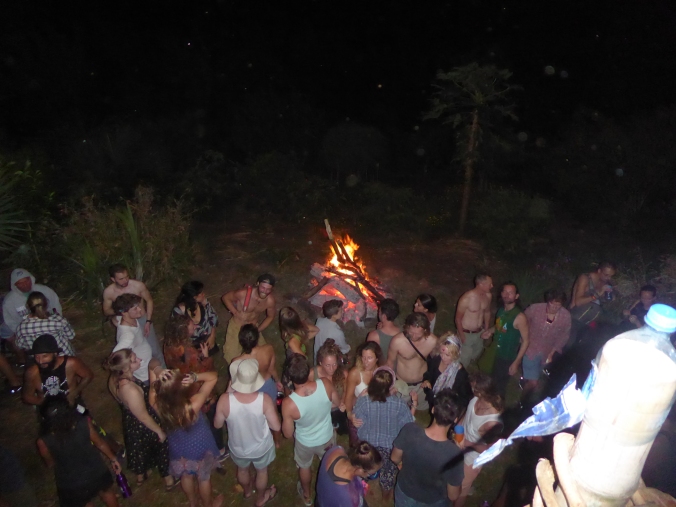 As the sun rose it illuminated an incredible backdrop, down the valley and across to Ometepe’s other volcano; it was another one of those magical moments of clarity where everything in the universe seemed perfectly aligned.

Departing Ometepe a day later than planned, to get over our volcano-party hangovers, we made our way to León in the north of Nicaragua for my birthday festivities. With our faith in volcano-based activities restored we signed up to volcano-boarding on a small, freshly-formed (‘fresh’ in that it first appeared in 1850), active and aptly named volcano Cerro Negro (‘black hill’).

On a gusty 45 minute hike up we struggled to stay upright with our boards strapped to our backs, but the walk was again worth it with 360 degree views of Nicaragua’s diverse landscape stretching out for miles in every direction.

The volcano-boarding itself was enjoyable but not quite the adrenaline rush we had expected, at least in part due to our cautious approach and generous application of the brakes (our heels) on the way down. Fearful of the stories we had heard about broken arms and other such injuries, we later found out that a guy in another group that day had been hospitalised, requiring a lot of work to remove volcanic grit from his face.

Happy to be physically intact as our volcano adventures finally came to an end, we staged a spontaneous karaoke session in the minibus back and sang our hearts out to the delight of our guide and bewilderment of the many local Nicaraguans who heard us along the way. Boggle, Bananagrams, a delicious Polish-Sri Lankan fusion dinner and a salsa club followed to round off an excellent birthday celebration.

After an inauspicious start I will look back fondly to the time we spent on Nicaraguan volcanoes. It is often said that there is no success without sacrifice, and on at least 3 of our 4 trips up their treacherous slopes the reward was absolutely worth the effort. Maybe as time passes I will change my views on our first ascent of Las Maderas, but for now I’m just delighted to be heading to the beach.