Words of the Day

Caldera: A large cauldron-like depression that forms following the evacuation of a magma chamber

Camping: (Informal) The act of attaching a bed sheet(s) to the side(s) of a bunk bed in a hostel dorm room to provide privacy for a couple partaking in sexual activities on the bottom bunk

During 5 days of intrepid solo exploring in Costa Rica I had a number of close encounters with beautiful wild animals, but far fewer interactions with the domesticated species at the top of the food chain: homo sapiens.

Staying in hostels I met plenty of travellers, struck up conversations and passed the time but didn’t meet anyone particularly engaging (I’m sure they all felt the same about me). Ultimately I decided to cut my losses, abandoning all friend-making efforts to focus on relaxing and reading.

I enjoyed the ‘me time’ and read a couple of great books but knew that this situation couldn’t last; instead of late nights at the bar, socialising with other travellers, I was choosing early nights in the bottom bunk (not camping, like a couple of Dutch backpackers that alerted me to the term) with only my Kindle for company – this did not feel like my natural habitat.

Wondering where I might go to find like-minded people, Whatsapp provided the answer as a familiar individual dropped a pin a mere 293km and a lot more than 5 hours and 17 minutes away, over the border in Nicaragua.

Rather than going travelling to “find myself,” within 5 days of departing I’d found Andy, my best mate from school, who was in Nicaragua for 3 weeks with his girlfriend Jolie.

Delighted to have two of my favourite people as potential travel buddies, we arranged to meet up in the Laguna de Apoyo the following day. After accusing me of not being a proper traveller in Madrid, Andy was now an accessory to the crime.

I’ll take a second to talk about these two legends as I can’t think of many couples who would allow a mate to gatecrash their romantic getaway. Two weeks into our family holiday (I am the son and they are my parents) they got a little more of me than they bargained for, but it’s been amazing and we’ve had a lot of fun; far too much fun for one blog post so I will start at the beginning and see how far I get.

Actually I will start before the beginning, due to noteworthy events which pre-dated the rendezvous with my new travel companions. Rather than calling it a prologue, this is the ‘amateurlogue’ for reasons that will become apparent.

I’m sure there are many more challenging border crossings in the world but there was a lot of walking, queuing and 4 separate cash payments (exit, entry, tax and admin fees) between Costa Rica and Nicaragua. Every time someone handed me a piece of paper I handed over some more cash and eventually I got through.

On the Nicaraguan side things felt raw and undeveloped against the relatively polished Costa Rica. Nicaragua is materially cheaper than its neighbour but I immediately wiped out any early cost savings by paying for the same bus ticket three times. 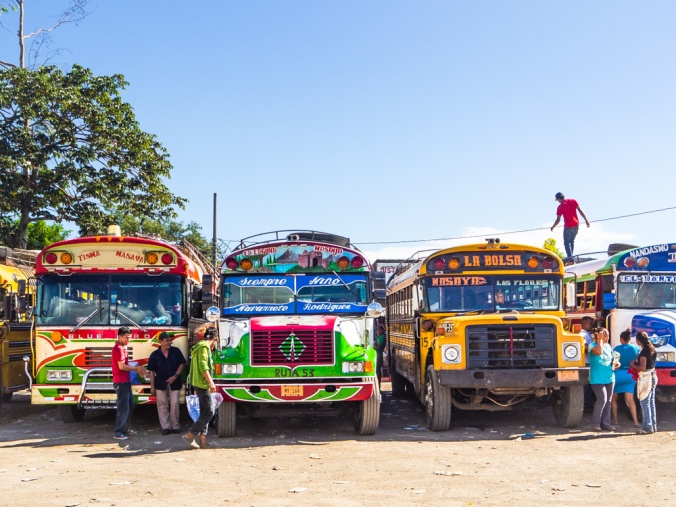 As I approached the famous ‘chicken buses’ (which are re-purposed American yellow school buses, often populated with chickens as well as people) a benevolent stranger helped me with my bag, sold me what turned out to be a fake $5 ticket and then said, in Spanish, “you have the ticket but what about me and my family?” I gave him a well-deserved extra dollar – if you’re going to rob someone, do it in style.

The second ticket salesman seemed legit as he took my original stub, pointed out it was fake (to be fair it referenced a completely different route on a different day), renounced his predecessor as a “bandido” and took another $5 off me for my new ticket. Strike two.

A third man approached me half an hour into the journey wearing a very official looking yellow t-shirt with words on it. I took a pre-emptive strike saying “please don’t ask me for $5” but that is exactly what he did. The ticket I showed him was apparently the wrong one or had ceased to be valid, and my entreaties were to no avail.

I couldn’t help but find it entertaining, which was a view shared by the local passengers who made no effort to conceal their mirth. We bonded over my misfortune and they kindly shared their selection of local snacks to soften the blow.

Finally, after a 10 hour journey, I made it to my destination and immediately fell in love with Laguna de Apoyo, an idyllic freshwater lake formed in the caldera of an extinct volcano.

Andy and Jolie (henceforth ‘Anjolie’) were waiting there patiently at the Beach Club with their new friend Drew and we got straight to work, polishing off a few local beers and a bottle of whisky as the sun went down. In search of some nightlife we stumbled across Quiz Night at a lively local hostel El Paradiso, argued over our team name (“Colombia my face”) and proceeded to drink a lot of rum.

Despite being the oldest people there by a comfortable margin we were by far the most fun (or the most annoying, depending on your perspective). One of the travelling volunteers who was hosting quiz night took particular exception to our mischievous ways and repeatedly admonished us. Being shushed by a 21 year old in a vest and board shorts only encouraged us and the poor guy’s agitation increased in line with our inebriation.

Surprisingly we did not trouble the scorers in the quiz but did make a lot of friends and got the party started. A dip in the lake ensued, which was a tepid 28 degrees even in the middle of the night. As I stared upwards from a pontoon at a mesmerizing, perfectly clear night sky I saw a few shooting stars and felt, for the first time in a while, “this is what it’s all about.”

One thought on “Day 83 – Amateur Hour in Nicaragua”