Whether Chaucer or someone else coined it, the proverb Time and tide wait for no man has been around for hundreds of years. Raising my bat to celebrate a shunemployed half century I now understand it better than ever.

Managing a travel day, like managing a workday, is all about prioritisation. The difference is that at work there is usually a clear winner for what you should be doing.  There is no “should” when travelling; there is only “do and do not” (thanks Yoda) and options are limitless.

While I’m enjoying my freedom it’s easy to get sidetracked; time is only on your side if you force it to be. After 4 days of pancake-flat water at a renowned surf spot I’ve realised there’s not much I can do about the tide.

Shunning the structure of the working week I anticipated an abundance of ‘me time;’ I would be gaining 40 plus hours each week, surely resulting in time aplenty for my stated travel objectives and other favoured but neglected pastimes such as reading, sitting and Netflix.

As a result my first 50 days have whizzed by, I’m still only 71% of the way through Sapiens and haven’t watched a single minute of Stranger Things 2.

With the Biarritz surf scene approaching its annual low tide I made the short trip across the border to San Sebastián, or Donostia to the Basque Country locals. Famed for its culinary scene, San Seb boasts more Michelin stars per capita than any other European city, an almost unmatched selection of pintxo (tapas) bars and a surf season that extends a couple of weeks beyond its French neighbour.

I rocked up at the Etxea Surf Hostel next to San Seb’s premier surf spot, Zurriola Beach, increasingly conscious of the need to spend my time on things I actually want to do, like surfing. In the lounge area an American guy was freestyling on the guitar. He was a strong musician but a dubious lyricist:

I smoked a bunch of joints, in the morning and the night,

I smoked so many joints, most I’d had in my life.

Listening to Johnny Hash did not feature anywhere on my to do list so, in line with my new views on time management, I left him to it.

Despite a few travellers in their 30’s I was clearly the oldest guest until the perfectly named and excellent human being Jerry Valentine spared me that honour.

Jerry is a very young 55 year old retiree from New Jersey who spends his time either chasing waves or saving lives at Avalon beach on America’s Jersey Shore. Give him a high five from me if you see him next summer.

Avalon swimmers will feel extra safe with Crawford, who lifeguards at the same beach, on duty. Stacked like shelves, the de facto fourth Hemsworth brother combines with Jerry, 35 years his senior, to form an unlikely but perfectly balanced travel partnership.

Last but not least is Sebastien – Chile’s answer to Steve Stifler and my first official new BFF – a surfer, skateboarder and future Warren Buffett. Being hilarious in a second language is a skill I do not possess but value highly and the Stifmeister has it in abundance.

I’ll let you guess who is who in the photos below.

Rather than maximising personal time I took the opportunity to hang out with this crew, which swelled and ebbed as others rolled in and out of town. We were not collecting Michelin stars but enjoyed the rest of what San Sebastián has to offer.

We walked everywhere, taking in the beautiful scenery both in the city and its surrounding hills. We drank Spanish wine, local cider and monster G&Ts. We think we enjoyed but don’t really remember a couple of 5am finishes at the entertaining but creepy dabadaba.

One thing we did not do a lot of was surfing. One surfable day out of five was a poor return but I was encouraged to catch a couple of clean waves; a glimmer of hope.

Not surfing freed up plenty of time to live like locals, eating delicious and reasonably priced pintxos. To contextualise the brilliance of this city may I introduce Bar Sport. 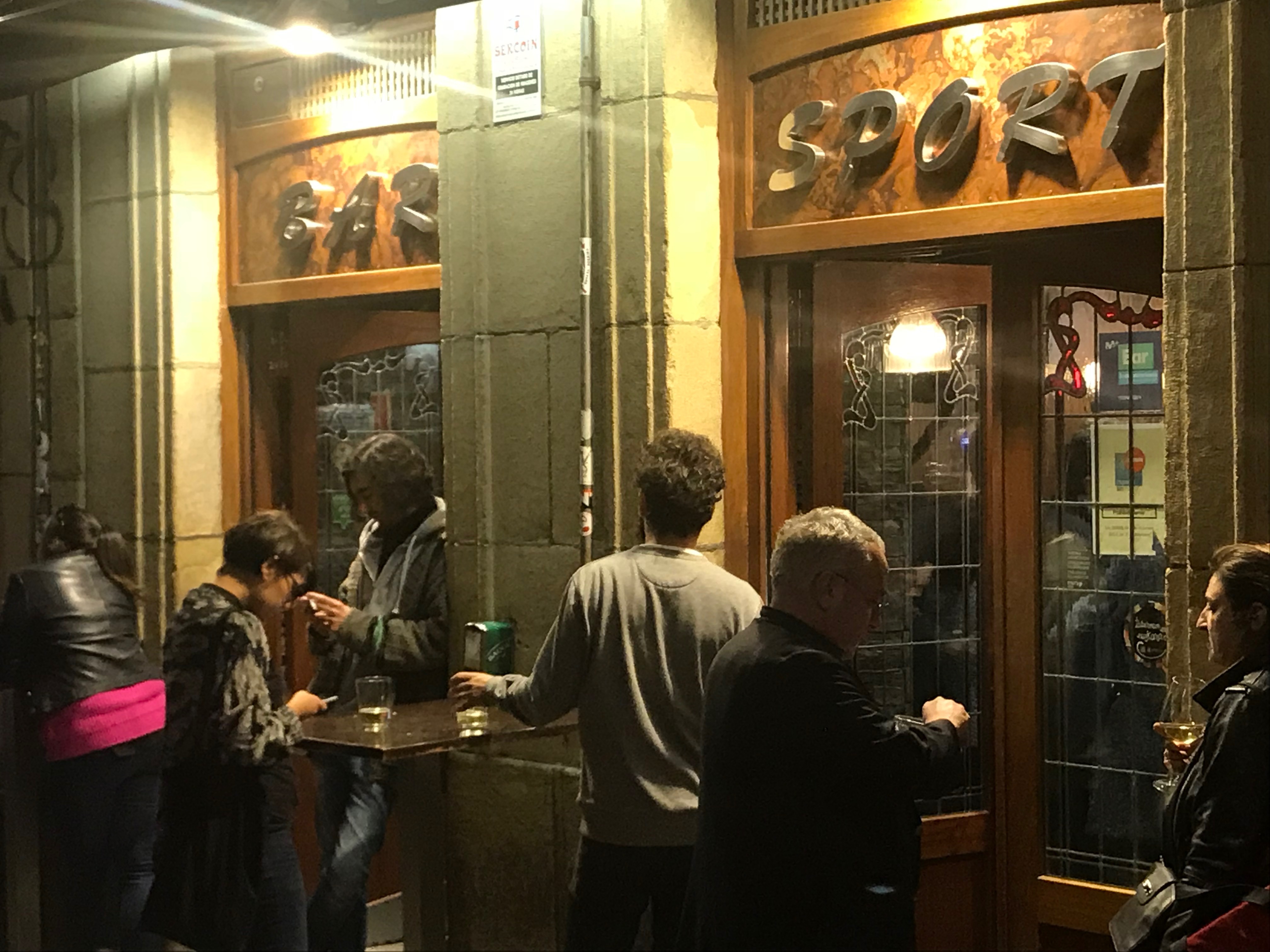 If you were to put Bar Sport on Old Street roundabout in London it would contain a selection of strippers and people wanting to knock you out. In San Seb it’s a fine culinary establishment serving exquisite pintxos while Real Madrid entertain on TV.

It was absolutely banging; I can only imagine the culinary wonders available in this city for those willing to spend serious euros.

Despite the lack of surf in San Seb there was plenty to do (and eat) over 5 days and I would highly recommend a visit. Whether you have time and cash to burn or just want to escape for the weekend on a tight budget, a trip to San Sebastián is both time and money well spent.

Follow the blog by entering your email address on this page