Word of the day: Teutonic – characteristic of or relating to the German people

Cocktail of the day: Gin and Teutonic – gin, tonic and bitte lemon

There is a consistent theme in my approach to travel: do everything as late as possible without it becoming stressful. This applies to booking flights, packing bags and choosing how fine to cut it for an airport arrival. It often annoys other people but I like it.

Weddings and special occasions aside I’m not the kind of person who would arrange a long weekend 9 months in advance, and yet for this year’s Oktoberfest (also known as the wiesn) I booked my flights in January, proudly informing my slightly bemused Munich friends, most of whom were still recovering from their 2016 festival hangovers.

So why did I make an exception for this funny-looking event with its lederhosen and dirndls? Because it is a special occasion. For me, Oktoberfest is an almost perfect combination of features which, independently, might seem a bit strange or awkward but when mixed together under a massive tent in Munich create magic.

Honed for over 200 years the festival has maintained its Bavarian traditions and adopted some new ones. The music is a prime example: each tent has a live band playing a ridiculous mix of songs that could only work at the wiesn. There are traditional German oompah oompah songs focused mainly around drinking beer, catchy German language favourites known as ‘wiesn hits’ including belters like Schatzi schenk mir ein photo (Baby send me a photo) and then seemingly random pop songs from all eras that have become Oktoberfest classics – Sweet Caroline, the Macarena, Sex on Fire, The Cheeky Girls.

Yep, the Cheeky Girls. Based on this playlist excerpt it could be a cheese festival but the thing that unites these tunes is they are great for a singalong. I bloody love a singalong and I’m not the only one: everyone sings and dances along from their perch on one of the long benches and it is brilliant. The atmosphere in the huge Oktoberfest tents towards the end of a night is as good as any club or concert: packed and rowdy but always friendly.

Everyone there wants the same things: it’s all about drinking, dancing, making friends and having fun. Four of my favourite things, which is probably why I keep going back 🙂

This sweaty excerpt from my Instagram story (@odjuns) doesn’t do it justice but gives you the general idea. Cinematography takes a back seat after 5 or 6 litres of Bavarian beer.

Most tall blonde men called Oliver wearing lederhosen at Oktoberfest are very German. People in Munich often assume I am a local but, like many before me, I am a tourist who had to learn the hard way to truly understand The Reason For The Wiesn (I came up with this as a name for the next wiesn hit but don’t have any other lyrics or a tune yet).

I first visited Munich for Oktoberfest in 2012; sat in the Käfer tent beer garden with my Australian Teutonophile mate (hi Bobby) I looked around and started to wonder why I had just spent over €200 on my entry level lederhosen and calf warmers (this was the only photo of me fully kitted out that year, because beer). 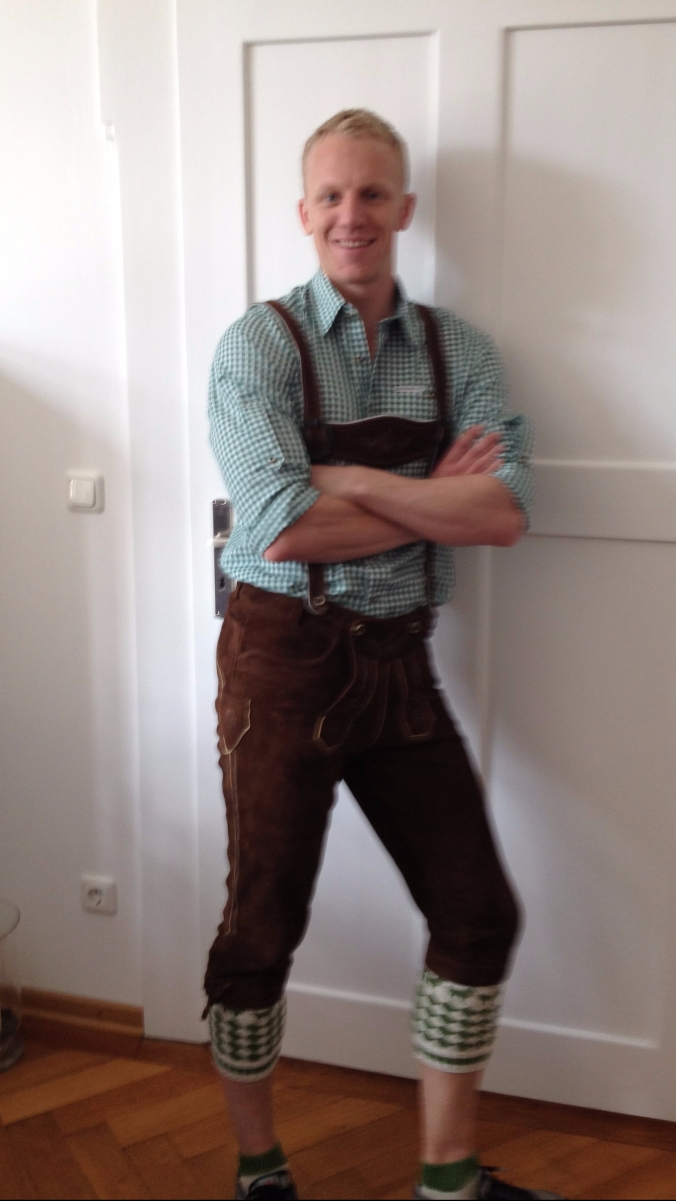 Bearded old men, families with young children, tourists, chicken and pretzels. After all the hype I looked at Bobby and said “this isn’t quite what I was expecting.” His response was as Australian as it was Bavarian: “Don’t worry OJ, just drink your beer and wait for the magic to happen.”

I did what I was told and it worked. The weekend was more fun than almost any other before or since; I had to be dragged away (literally) on the Sunday when I refused to leave for the airport. Two days into Oktoberfest 2017 the magic is most definitely happening again.